On a chilly December morning, as the first rays of sunlight pierced through the veil of fog created by the condensing water vapour rising from the forgotten Adi Ganga river passing nearby, it revealed the silhouette of a massive and ancient banyan tree the likes of which perhaps nowhere else could anyone find. The golden beams of the sun darted through the few gaps in the mighty banyan’s enormous and thick foliage to cast down a mosaic of dancing and dazzling yellow shapes on the green and brown earth below and the smoking river surface.

The dawning rays further unveiled a crumbling and archaic Hindu temple of thin and exposed skeletal bricks, fifty metres from the old banyan, covered in sprouting wild vegetation, housing a unique deity of Goddess Kali made of eight rare metals, worshipped by the villagers every day.

The deity was believed to be very powerful and stories of its miracles and divine providence travelled to far off regions. A hundred metres beyond the temple across a green paddy field lay the sleepy village of Botgram deep in the hinterlands of the South 24 Parganas district in India’s West Bengal state.

The Adi Ganga or the original river Ganges once flowed through here, however, gradually through the centuries the mighty river changed its course leaving behind a thin canal in its place. On the left bank of this once mighty river stood the majestic Banyan, the antique temple of the miraculous goddess, and the tiny village of just twenty houses with fifty residents.

As the piercing morning light gradually cleared the previous night’s mists away, smoke from woodfire and cow dung patty fuelled earthen cinders slowly rose above the thatched hamlet indicating the start of another village day. The crowing of rivalling roosters, moo of sulking cows, bleats of fleeting goats, barks of local dogs, and grunts of domestic swine and wild boars mixed with the hoots and chirps of different birds gradually woke up the village sleepy heads.

“Bhuto, aye Bhuto, where on earth are you goddamnit,” shrieked a rickety old lady as she wobbled out of a dilapidated hut, swinging her crooked cane in the air, cursing to her heart’s content, creating a ruckus, which the villagers were used to listening every day.

“Have you gone up to climb the godforsaken banyan again along with your troublesome friends? Now, who will take the goats out to graze? Aye Goddess Kali why have you left me with this cursed orphan, who killed his mother at birth and caused his father my only son to commit suicide and end his life in the most horrible way,” cried and shouted the old woman banging her feeble bosom with her crumpled and wrinkled fists walking down the main village alleyway.

“Bhuto, your frantic grandma is on the rampage again,” commented twelve-year-old Potla peeping through a camouflaged window of leaves and twigs, which opened and closed like a stage curtain, operated by pulleys, levers and ropes fabricated by Bhuto and his engineer friends, at about one hundred feet above the ground on the western face of the mighty banyan’s foliage, facing the village.

“Chill grandma, boys will always be boys,” chuckled Daton the toothless village blacksmith as he prepared to fire up his hearth for the day. “They are just up in their beloved tree. They will come down when they get hungry,” continued Daton speaking with a steady stream of spit jutting out of his toothless face. “Don’t defend the boys, you spitting fool. They have enough food stashed up in that tree to feed the entire village for a month you imbecile. God only know what these kids do up in the tree all day,” mumbled grandma as she walked away.

“Why do you encourage the boys Daton. They are always stealing our tool, nails, metal, and wood for their silly games up on the tree,” commented Gurupodo, the village carpenter, as he chewed on and violently poked his mouth with a Neem twig, brushing his teeth in the ancient Indian way.

“Okay, granny has calmed down, as usual, she won’t be searching for you for the next few hours I guess,” said Godai to Bhuto looking out through another camouflaged window a storey higher up in the tree from where Potla had peeped out to report grandma’s initial fit of rage. Few more such windows opened and closed all around the Banyan’s thick and impregnable foliage as Bhuto’s friends peeped out of them to gather useless intel about their uneventful village as part of their childish treehouse games.

A hundred kilometres from Botgram through the neighbouring forest rode a fast-moving hoard of fifty horsemen. Peetombor and Kalu led the group on their two jet-black Malani stallions. The brothers had carved a name of terror for themselves in the Bengal region. They and their band of dacoits had been looting and plundering, moving from one village to the next. No one knew where their secret hideout was and how they managed to cover their tracks and always vanish away.

The year was 1702 CE, the Malla king Raghunath Singha Dev II had just inherited the throne of Bengal from his Father the brave Durjan Singha Dev. King Raghunath who though a competent ruler was more inclined towards music, dance, and artistic performances. He had not yet given adequate attention to Peetombor and Kalu’s looting rampage.

Two hundred hooves drummed on the soggy forest floor on that cold winter morning in December heading towards Botgram, the small and unknown village of twenty houses with fifty people. The previous night they had just plundered the neighbouring village of Chapadanga and though their next logical target on the path of plunder was Botgram, there was another strong reason for them to head that way.

The brothers were great devotees of Goddess Kali and had heard about the miraculous power of the unique rare eight metal deity in the temple of Botgram. They wanted to bring and establish it in their own secret hideout forest temple. Of course, they would also loot the village of all its food and riches, violate women, and if necessary, kill to make an example or simply fuel their sadistic ways.

After two hours of hard riding, the dacoits were finally at the village. They tore into the peaceful hamlet shrieking horrifying battle cries creating dust clouds with their galloping horses. The looters frantically wielded their sabres and spears slashing and jabbing through anything that lay in their way.

As the initial frenzy of the attack calmed and the blinding dust settled, Peetombor, Kalu, and the bandits could not comprehend what they saw in front of them. There was not a single human being in the village. Cows, goats, pigs, dogs, and hens roamed around but there were no men, women, or children. Food was still cooking on the earthen stoves, but no one was around to tend. There were signs of human activities everywhere but no villagers anywhere. It was as if the people had just vanished moments before the dacoits came.

Peetombor and Kalu’s men frantically searched every nook and corner a few kilometres in every direction but could not find a single human. Now, they were really scared. It had to be divine intervention. The dacoits were convinced that Goddess Kali of Botgram must have performed a miracle and teleported the villagers to a safe place before they arrived in the village. There was simply no other explanation.

Now scared of the wrath of the Goddess, the bandits decided not to take a single thing from this divinely protected village. Standing in front of the ancient temple Peetombor and Kalu bowed to ask for forgiveness from the Goddess. “Oh! Mother Kali, we will never come here again and promise to abstain from looting any village with your temple in it,” cried the two dacoit brothers with folded palms, before leaving the village once and for all with their horses and men.

As the bandits rode away, camouflaged windows slowly started opening up on the mighty banyan’s foliage. Moments later a wooden basket came down the tree like a lift, lowered through an ingenious system of ropes and pulleys operated by a wooded wheel slowly turned by two boys hidden somewhere inside the banyan’s bowels. From the basket stepped out toothless Daton the blacksmith and Guropodo the carpenter and signalled that they were out of harm’s way.

Runged and knotted rope ladders came down from the mighty banyan and one after the other men, women, and children descended from the branches. The basket lift went up and down to bring down the aged.

It seemed that over the past three years Bhuto and his friends had become obsessed with creating an intricate livable world on planks and platforms hidden deep in the mighty banyan’s foliage.

Their childish game of keeping a lookout through the camouflaged windows spotted the approaching bandits long before they arrived at the village. In a great show of bravery and presence of mind, the children came down and gathered the villagers, alerted them of the approaching danger, and convinced them to hide in the tree in time before the bandits came.

The villagers never told anyone about this event as they wanted to keep the possibility of escaping into the banyan if ever needed. As the years passed by, upkeep of the secret treehouse was handed down to children through the generations, who constantly developed the living space and facilities in the tree’s bowels.

So today if you somehow happen to land in Botgram do visit the ancient temple of the eight rare metal deity of Goddess Kali and catch a glimpse of Bhuto’s Banya Tree, who knows you may spot a kid peeping out of a camouflaged window keeping a watchful eye as a hidden sentinel. 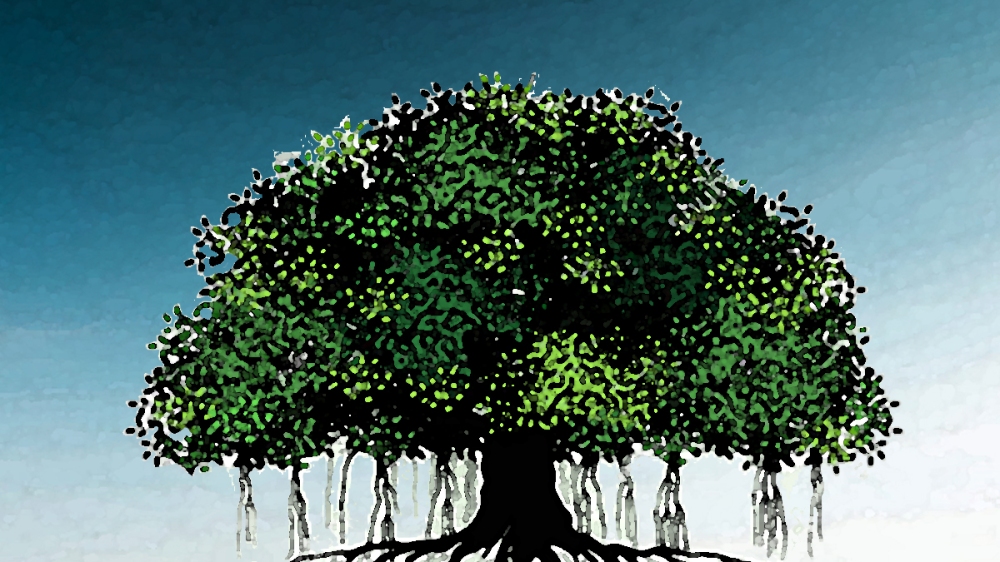 This work of fiction, written by Trishikh Dasgupta is the author’s sole intellectual property. All rights are reserved. No part of this story may be reproduced, distributed, or transmitted in any form or by any means, including printing, photocopying, recording, or other electronic or mechanical methods, without the prior written permission of the author, except in the case of brief quotations embodied in critical reviews and certain other noncommercial uses permitted by copyright law. For permission requests, send an email to the author at trishikh@gmail.com or get in touch with Trishikh on the CONTACT page of this website.

Adventurer, philosopher, writer, painter, photographer, craftsman, innovator, or just a momentary speck in the universe flickering to leave behind a footprint on the sands of time... READ MORE